Immerse yourself in native Australian environs.
;

Cape Otway Lightstation would like to acknowledge the traditional custodians of this land on which we operate today, and we pay our respect to their Elders past and present. We acknowledge our gratitude that we share this land today, our sorrow at some of the cost of that sharing and our hope and belief that we can move to a place of equity and partnership together.

Cape Otway is centrally situated in Gadubanud country, within which there are five celebrated Gundidjs’ (Clans) which are part of the Gundidjmara Language group of south-west Victoria.

The Cape Otway area with its abundance of resources and tradition makes it an area of high cultural and archaeological significance.  Archaeological survey reports have documented tool making sites, midden sites and in abundance. Whilst protected and not available for viewing onsite the Middens typically display fragments of turban shells, abalone, elephant fish, chiton, beaked mussel and limpets. Eels and ducks were also eaten. New Zealand spinach and other herbs are abundant as well as many tubers and berries.

Opened in September 2010 and hand created mainly by local Indigenous people in consultation with elders and Parks Victoria, the area includes a Talking Hut, a Keeping Place, a Billabong Sculpture and a protected nature walk.

New Zealand spinach was a common vegetable and many tubers and berries were available. Bark canoes were used in the rivers, lakes, estuaries and along the coast. Early ship’s logs reported Indigenous people sailing close to shore in this region. (Pascoe & Harwood 1997)

Local Gadubanud and other Indigenous people retain a strong connection to these places. Some historical records indicate the Gadubanud were considered to be ‘wild’ by the Kirrae Wurrung to the west and the Wathaurong to the north-east, although it is believed they had a connection with the Gulidjan to the north.

It is known that the Gadubanud traded spear wood for Mt William green stone when tribes from a wide area of Victoria met for traditional ceremonies at Mt Noorat, Mt Napier and Gariwerd. Many sites and spiritual links remain today.

Many Indigenous people were killed by early European explorers and settlers who were claiming and clearing land for pasture and infrastructure in the 19th century (Pers. Comm., Harradine 2000)

At the Cape we have over 15 native plants growing. Meet at the Talking Hut and join our guides to learn about the many culinary and medicinal uses and benefits of these plants. 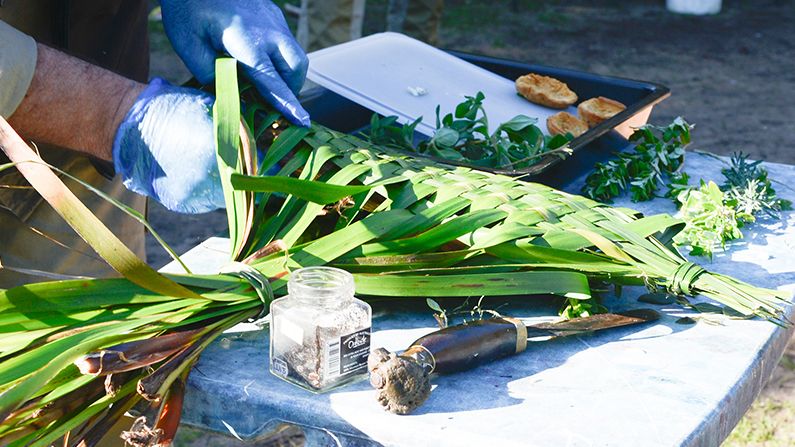