A daring feat! The first ever ‘road trip’ to Cape Otway Lighthouse!

The first motor car to reach Cape Otway Lighthouse was a Model-T Ford driven by Bill Gratton Wilson in February 1932. Getting a motor car to the Lightstation in those days was no easy feat, but Bill, his wife Mary and their four-month-old son Eliot made it in 1932, bumping along the rough trail. Before this trip, visitors had only ever come on foot, by horse and cart or bullock dray. We have incredible photos shared with us by the late Malcolm Brack, documenting the Wilson family’s historic car journey. 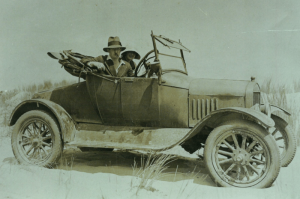 The group set out from the Johanna area and followed the same route as Bertie Whelan, a bullock wagon driver who delivered supplies to the families stationed at Cape Otway Lighthouse. The bullock trail went from Lavers Hill and crossed the ‘Pigs Back’, a name given to that stretch of track because just like trying to grab the soft hairy skin of a pig, the hill at ‘Pigs Back’ proved a challenge when it came to traction. 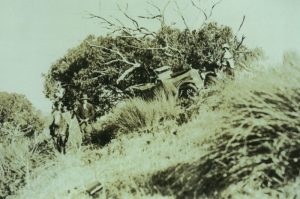 Crossing the Pigs Back 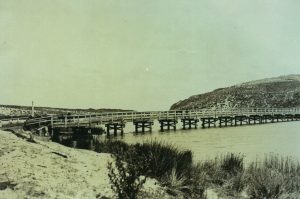 From ‘Pigs Back’ the track continued through the paddocks and came out at the Aire River.
The Wilson’s took the car over the Aire River Bridge and into the sand dunes where they came unstuck.
Were it not for Cyril and Charlie Speight, members of a pioneering family living in Johanna, the Wilson’s might never have made it to Cape Otway Lighthouse.
The Speight’s supported the group on horseback and helped dig the Ford out of the sand, accompanying the family the rest of the way to the Lightstation, where celebrations were had to mark the historic occasion. 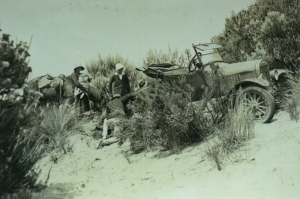 A helping hand again from the Speights. Mary with baby Elliot Hilda Speight at rear of car 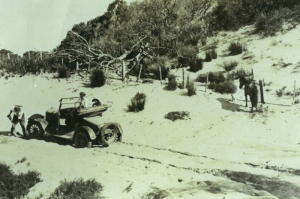 Bogged in the sand Speights arrived to help dig them out 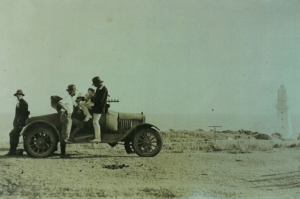 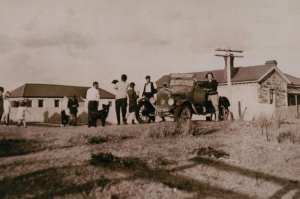 Welcomed by the Lighthouse staff with an offer of accommodation

80 years later Bill’s son Elliot Gratton Wilson, the 4 month old baby in the photographs, planned a re-enactment of the epic road-trip with his cousin and local Cape Otway resident Cyril Marriner taking a shorter route from nearby Bimbi Park using the same tracks.