Shortly after daybreak on November 9th, 1940, 37 members of the crew of the American freighter CITY OF RAYVILLE, who were wet and cold after sheltering in lifeboats in the choppy water of Bass Strait for more than 12 hours,…...
Subscribe

Shortly after daybreak on November 9th, 1940, 37 members of the crew of the American freighter CITY OF RAYVILLE, who were wet and cold after sheltering in lifeboats in the choppy water of Bass Strait for more than 12 hours, stepped ashore at the tiny Victorian fishing port of Apollo Bay, situated close by the main shipping lanes and a few miles east of Cape Otway. 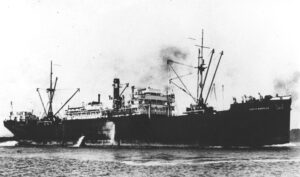 The CITY OF RAYVILLE, the second victim within 24 hours of an extensive minefield laid by German raiders about a fortnight earlier, was the first American vessel sunk in World War II.

The German raider PINGUIN, a motor vessel of 7,766 tons, which had been sent to operate around the Australian coast during the winter months, and the Antarctic during the whaling season, disposed of 28 Allied vessels before she was destroyed by H.M.S. CORNWALL early in 1941. On October 7th 1940, when off the north‑west coast of Australia, the Norwegian tanker STORSTAD was captured and the PINGUIN‘s captain, Ernst Kruder, decided this prize would be most useful as an additional minelayer, so after renaming her PASSAT and transferring the crew to his own ship, she was loaded with I 10 mines and sailed to a point near North West Cape, Western Australia, where she spent three days undergoing conversion for minelaying.

Kruder had planned that his ships would mine the approaches to Sydney, Newcastle, Hobart, Adelaide and Melbourne before sailing south for general maintenance and overhaul, since the PINGUIN had been at sea six months. On October 12th the PASSAT proceeded on a course parallel with the West Australian coast, passing Cape Leeuwin six days later and going southeast and around the south of Tasmania to the entrance of Banks Strait. There, on the night of October 29th, she laid 30 mines in two lays, one of 5 and the other 25. Next night she passed east of Flinders Island and laid 30 mines in three fields of 10, between Deal and Cliffy Islands, in addition to 10 off Wilson’s Promontory.

All that now remained was the western approaches near Cape Otway, where, on the night of October 31st, she laid 40 mines,

Immediately after the CITY OF RAYVILLE was lost, several Apollo Bay fishermen recalled that about a week earlier they had seen a large unidentified vessel while fishing at Point Franklin, a few miles east of Cape Otway. This vessel had approached from the south, and when about two ‑miles offshore, had turned and disappeared south‑east. At the time the fishermen were puzzled by her movements, but the incident was forgotten and no report reached official circles.

A fortnight later the PASSAT rejoined the PINGUIN in the Indian Ocean.  They continued operations together for a short time. When the PINGUIN was destroyed by the CORNWALL, her brave and resourceful captain went down with his ship. The first victim of the minefields was the British steamer CAMBRIDGE (10,855 tons) as she rounded South East Point, Wilson’s Promontory, some 21/2 miles offshore at 11p.m. on November 7th, 1940. The vessel sank rapidly, stern first, and of the complement of 58, one man, the carpenter, was lost.  HMAS ORARA rescued the survivors and landed them at Welshpool.

Less than 24 hours later, at 7.30 p.m. on November 8th, the CITY OF RAYVILLE struck a mine six miles south of Cape Otway while bound from Adelaide to Melbourne, with 1500 tons of lead loaded at Port Pirie.

Local fishermen considered her extremely unlucky.  The currents in the area reached four or five knots when the tide is running and any mines anchored to the sea bed would be dragged out of the perpendicular, thus clearing the shipping lane. The RAYVILLE, heavily laden and sitting low in the water, reached the area in slack water between tides when mines would provide the maximum hazard. A bright flash, followed by the rumble of an explosion, alerted the Cape Otway lighthouse, which soon contacted Apollo Bay seeking help from the fishing fleet.

Conditions were not good. A strong north‑easterly was whipping up the sea and most fishermen, anticipating bad weather, had winched their small craft, less than 30 feet in length, on to the pier, but three boats, owned by W. Ovens, T. Fisk and J. Muir, containing nine men, left immediately to search for survivors.

As the craft headed into the open sea on a search expected to take them more than 20 miles south of the port, they were swept by seas which necessitated constant bailing.  In addition, rain squalls made observation difficult, but soon the fishermen were able to take bearings from the lighthouse, and some hours later flares were sighted about seven miles west from where the ship had sunk. A  long search in the darkness followed.  Finally, after several false alarms, two lifeboats were located wallowing in the sea, lines were attached and they were towed back to Apollo Bay.

Later the ship’s master, Captain Cronin, reported that the vessel had sunk in 35 minutes, bow first, the only casualty being the Third Engineer, M. Bryant, who had lost his life when he returned to the vessel to recover personal effects. Bryant was seen to dive from the ship, but he apparently struck his head on floating debris and disappeared before the lifeboat could reach him.

The hotels in Apollo Bay generously cared for the Americans and the townspeople were lavish with their hospitality during the few days the crew spent in the port, where the men were clothed with the assistance of the Apollo Bay branch of the Red Cross. 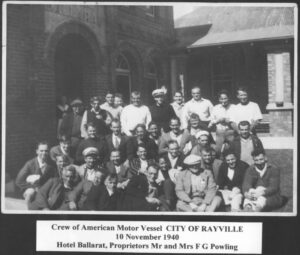 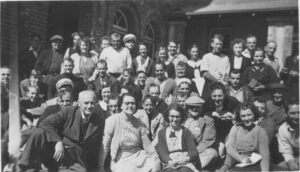 Townspeople entertained the crew before their departure for Melbourne, while Lorne and Anglesea folk extended hospitality to them as they passed their towns. A few days later they were the guests of the Governor of Victoria, Sir Winston Dugan at Government House.

A delicate situation arose when the United States Consul General in Melbourne, after accepting an invitation to attend a dinner organised by the Otway Shire to honour the fishermen, withdrew at the last moment. Several lengthy telephone calls and “straight talking” by the Shire Secretary, Tom Fry, restored the situation and the function proceeded as planned. The illuminated address presented to the men is displayed in the Cable Station Museum, Apollo Bay.

The CITY OF RAYVILLE was the last victim of the PASSAT’s minefields. Soon afterwards a mine drifted ashore at Point Bunbury, on the edge of the town, where it was destroyed by naval men, and two were reported ashore at Station Beach, west of Cape Otway. Minesweeping operations commenced on November 9th, and 43 mines from the Bass Strait fields were recovered by sweeping, destroyed after being found floating, or rendered safe after coming ashore. The last mine destroyed known to have come from the Cape Otway fields came ashore near Yuulong, west of Cape Otway, on December 11th, 1943.

The crew of the RAYVILLE returned to the U.S. and resumed service on American vessels, some being captured and killed by the Japanese.

Today, the CITY OF RAYVILLE still lies in about 200 feet of water, probably still intact.  A reputed $34,000, pay for the crew in Melbourne, is locked in the strong room, but to date no attempt has been made to salvage the cargo.

An Apollo Bay fisherman has the keys of the ship’s strong room, given to him by the captain, and also a letter which members of the rescue party received from the United States Government. It reads: 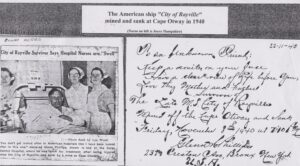 There has come to my attention your participation in the rescue of members of the crew of the American vessel CITY OF RAYVILLE off Cape Otway on the night of November 8, 1940.

On behalf of the President of the United States I wish to express to you his appreciation and that of this Government for your courageous and prompt action in going to the assistance of these American seamen.

Another letter can be seen at Apollo Bay:

Please accept the profound thanks and appreciation of the entire crew of the wrecked AM. US CITY OF RAYVILLE for the wonderful care and help extended to us when we were landed at Apollo Bay on the morning of November 9, 1940.

In a letter received early in May 1967, John E. Green supplied brief details of the subsequent careers of the ship’s officers.

“I am presently Marine Superintendent of the Company who owned the RAYVILLE.  After the sinking I returned to Australia a year later and was in Sydney on Pearl Harbour day, December 7th, 1941.  I was sunk again by a German submarine off Durban, South Africa on March 8th, 1942, and spent 4 days in a lifeboat before being rescued, 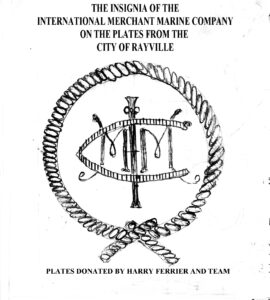 Click here to discover more about the role Cape Otway Lightstation played during WWII and our new Radar Exhibition which was officially opened this week!